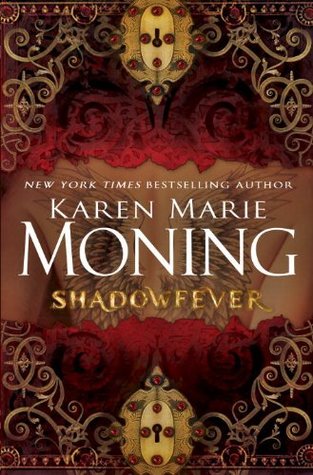 Shadowfever is the coup de grâce of the Fever series. An absolute masterpiece! It is the culmination of this series where all of your important questions will be answered and you’ll be left feeling complete. I had my doubts on whether Moning would be able to wrap up Mac’s story in a little under 600 pages. After having experienced heart palpitations and shortness of breath after every cliff hanger ending for 4 books this one made it all worthwhile. This has to be the best ending to any series that I have ever read! I’m left feeling appeased but wanting to read the whole series all over again and I just finished it only days ago!

There is never a dull moment in this finale. I was dreading reading a book this size but when all was said and done, I wouldn’t have even noticed a few extra hundred pages. The Fever is like a drug; I got completely lost in it and never wanted it to end. This book is a doozy! We find out who Mac is, what Barrons is, who Vlane really is, how the Sinsar Dubh escaped, and the list goes on! Everything that has had you pulling your hair out for the last four books is revealed. Maybe you saw some of them coming but for the most part you probably had no idea. At least, I know that I sure didn’t! But they all make sense, the dots connect beautifully. It’s rare for a series to be able to completely tie up all of the lose ends and to leave the reader feeling satisfied but Karen Marie Moning pulls it off. I should have known better than to doubt her skill!

The story starts off running and doesn’t stop until the final page. The mystery behind the cliff hanger ending of Dreamfever is revealed but in true Moning fashion, she does make you wait a chapter or two. Mac 5.0 is the solution to stopping the Fae from destroying the world. It took four books, many trial and errors, and an iron will but she’s finally up to the task. I loved experiencing the journey with her and couldn’t imagine it having gone any other way. For the first part of this series she was sick of everyone using her and telling her what to do but in this final installment she actually turns to others to make tough decisions for her and they refuse. They offer advice and guidance but leave the ultimate decisions to Mac. She makes some tough calls but they’re good ones overall even though they may not seem like it at the time. I never had many questions when it came to Mac. Sure, we don’t know who her birth mother is (yet) but other than that she was the only character in this series who wasn’t a mystery. That certainty is thrown out the window in this book. She goes through so many possible origins that it’ll have you questioning all of the previous books. Fortunately, all is revealed in the end.

Shadowfever was so good that it deserves a 5++ on my rating scale. Yes, it’s THAT good! But it’s only that good because of the four other books that came before it and the build-up to the end so don’t cheat and read this one first. They’re meant to be savored. Try and read them slowly if you can, otherwise you’ll be stuck like me with the urge to read them all again. Or maybe everyone feels that way… I’m sad to be moving away from the Fever onto other books but the ending did hint that there may be more to come. Perhaps an offshoot series with another character as the lead? One can only hope! Thanks for the wild ride Karen Marie Moning, it’s been a pleasure!