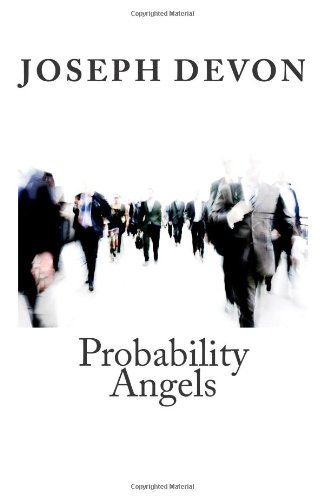 Matthew Huntington’s problems seem to keep growing. Not only is he seeing things in garbage cans but his mentor doesn’t think he’s working up to his full potential, his best friend can’t offer any solace but drunken confusion and his wife is dying in Central Park. Of course, the fact that Matthew himself died over two decades ago isn’t helping things.

Probability Angels is a heavy, somewhat complicated read with an interesting storyline. I had a hard time getting into this book, I mostly felt lost and confused. The constantly shifting POVs and flashbacks of past events made this novel very difficult to follow. The lack of any introduction to the concept and terminology also left me struggling to fit the pieces together. I tried to read this book with an open mind but never managed to really get into the story nor develop any sort of understanding of the characters.

The premise is an interesting one and the main reason why I opted to read this novel. Angels choose “meatbags” (a.k.a. humans) to “push” to go above and beyond their limits in order to accomplish great things. Isaac Newton was one such charge. His angel pushed him to greatness so to speak. But then the rest of the story is a little fuzzy. The author uses a bunch of terminology that’s never really explained. Readers will figure out what most of it means while reading the book but I think this novel would have benefited from a stronger introduction. A good foundation would have made the story a lot more coherent. If I would have had a better idea of what the author was trying to express from the beginning I think my views on this book would have been vastly different.

The story is told from various POVs that are constantly shifting; add to that numerous flashbacks into the past and you’re left with one confused reader. At least I was anyway. The character who was narrating and the time period sometimes changed within the span of a paragraph without any indication that that’s what happened. The book jumped around from present day, to Japan in the time of the samurai to ancient Rome. I had no idea what was going on half of the time. I enjoyed getting glimpses into the samurai’s life but he was the only character I liked.

I’m not entirely sure how much actual “pushing” these angels accomplished. It seemed like most of the “meatbags” were doing okay on their own and would have gotten to the same place regardless of whether there was an angel helping them or not. The characters had awfully high opinions of themselves when in reality their main purpose seemed to be a moot point. The angels think that humans would never accomplish anything if it weren’t for them. Maybe in this reality but I kinda took offense to the author’s portrayal of present day society.

I was hoping that the ending would make up for this book’s shortcomings but it did not. It was weak and offered very little resolution to the overall story. The writing style changed a great deal towards the end only adding to the confusion. There are plenty of glowing reviews out there for Probability Angels but for me, reading this book felt more like a test of patience than an enjoyable diversion.