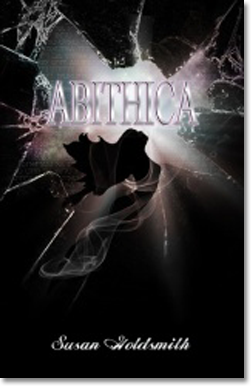 What if you knew you were about to be torn from your body and replaced by an imposter in a seamless switch forever separating you and the one you love? Would you do whatever it took to stay? Even if YOU happened to be the imposter?

Abithica must borrow all that she is from others: names, lives, even bodies. When she switches into the troubled life of Sydney Turner, she breaks the rule that has sustained her, the one thing in her control—never get attached. Lane Riley has no idea he’s fallen for Abithica, wearing Sydney Turner’s body and that a future with her is impossible. Desperate to stay with him, Abithica uncovers the mystery of what she is, only to learn she’s a pawn in a battle over souls, and that she’s probably one of the “bad guys.” What will happen if she refuses to leave Sydney’s body?

The first part of this book is shrouded in mystery. We quickly learn that Abithica is an unwilling body-snatcher of sorts. When you hear a term such as this one you immediately think evil but that couldn’t be further from the truth in this case. Susan Goldsmith does an amazing job of portraying the main character’s thoughts and feelings in this novel. On top of trying to figure out what Abithica is I got so emotionally involved in her story that I was really rooting for everything to work out for her. This character’s life is one of such pain and suffering that regardless of what she turned out to be I wanted her to find peace and be happy.

We first meet Abithica during a body exchange. She finds herself in the midst of taking over a new host which is a pretty scary experience in itself. Not only is she catapulted into an unknown identify but initially she only has control of her mind until the transformation is complete. In this particular exchange she’s in a restaurant having lunch with her host’s mother when all of a sudden her new body face plants into its meal. It takes several minutes before Abithica gains full control of her new temporary body. Talk about embarrassing! Being in a busy restaurant surrounded by patrons with your face in your lunch unable to move. She never knows when she’s going to change bodies. One moment she’s living one life and has one identity and the next she’s experiencing a completely different reality.

Abithica has no idea who or what she is. She doesn’t even know her own name until later in the book. Her lot in life is very sad. She just wants to belong, to be loved, to have friends, and to have an identity of her own. Just when she starts feeling like she belongs, Abithica gets ripped from her host’s body and thrown into another one only to have to start all over again. Something that I found particularly interesting about this story was the fact that children and animals can sense her. They look at her host’s body and know that someone else is home. It’s a long held belief that animals and children are more attuned to things that are beyond the grasp of normal adults. They’re more receptive and connected to their surroundings. Or so the story goes as they say. I loved that Susan incorporated this into the storyline.

There’s also a side story that runs parallel to Abithica’s. It’s a sort of cult that preys on the more vulnerable members of society and makes them dependent through drug addiction, money, etc. The leaders give off an otherworldly feel but we don’t know much about them. What we do know is that Abithica’s last two hosts are members of this cult. Is there a connection? The main character’s story comes full circle but the cult’s does not. I expected that a few dots would be connected to leave the reader eager for a second installment but in this area the book fell short. The cult storyline was left hanging with no hints or cliff hangers to get you excited for book 2. It just abruptly ended leaving me to wonder if it is relevant to the plot or just thrown in as filler.

This book was a fascinating read overall. It explored the struggle that many of us face day-to-day: trying to find a place where we belong. Experiencing this story through Abithica’s point of view was heartbreaking. Susan Goldsmith does an excellent job of putting the reader in the main character’s shoes. I felt so sad for her and I was frustrated that she seemed destined for a life of torment. Abithica is an engaging and emotional read but there are a few holes in the storyline. Considering this is Susan’s debut novel I think she did a fantastic job and that this book’s shortcomings will be lessons learned for the upcoming sequel which I look forward to reading.