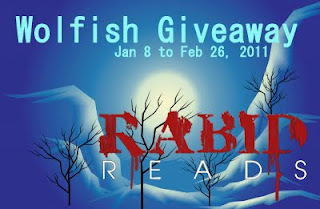 This is my 100th post! What better way to celebrate than with a giveaway! Or two or… 8! Yes, I will be giving away 8 werewolf new releases between January 8th and February 26th, 2011.

The giveaways will be as follows:

Emma Gavin writes about werewolves, but that doesn’t mean she believes in them-not until a pack of real-life New York weres decide to investigate the striking accuracy of her “fiction”.

When Aiden Wallace, son and heir of the pack leader, tries to sniff out Emma’s potential informant, he discovers something even more dangerous- an undeniable attraction to her.

Winners will be contacted by e-mail by myself and have 48 hours to respond. Each giveaway closes at 11:59AM EST. Winners will be chosen by random.org and this giveaway is open internationally (anywhere the book depository ships).

The final giveaway will be based on the cumulative entries from the 5 parts of this giveaway. One form submission per person per giveaway.