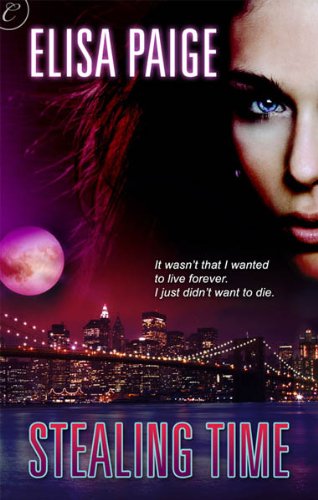 It wasn’t that she wanted to live forever. She just didn’t want to die.

When artist James Wesley realizes Evie Reed is dying, he is so moved by the beautiful reporter’s determination to live that he makes her immortal-a vampire, like him. She’s the woman he’s been waiting over 150 years for. Though initially shocked by the change, Evie quickly embraces her second chance at life, and love.

Just as James and Evie begin to define eternity together, a zealot breaks an ancient treaty, threatening a peace between humans and vampires that has stood for a thousand years. And when he focuses his hatred on Evie, the immortal lovers find themselves swept up in a deadly supernatural war…

The premise of this book is interesting, the characters are lovable but the plot has many gaps and is hard to follow. That’s not to say that this book isn’t worth your time. It’s a nice, leisurely read with a cute love story. I just felt that the overall end goal wasn’t obvious. The supernatural war that’s mentioned in the synopsis was an afterthought and didn’t really make an appearance until the end.

Evie’s background story is a sad one; she’s young, beautiful and dying. Luckily for her, she has a vampire guardian angel (so to speak) watching over her. After receiving her final prognosis, Evie gets into a fatal car crash while en-route from her doctor’s office. Talk about bad luck! That is until James swoops in and turns her dying mortal body into a vampire. For me, this was a great start to the novel. Having personally experienced cancer struggles with loved ones I rather enjoyed exploring this possibility. It added a dose of reality to Elisa Paige’s fictional world. The only downside was that all of this occurred within the first chapter. I would have liked to have learnt more about Evie and her struggle before she was turned.

Evie awakens to her new life in James’ house. She accepts her fate way too quickly in my opinion. There was little to no transition from her being terminally ill, to dying, to becoming a vampire. That’s not including the evolution of Evie and James’ romantic relationship. There were a few obstacles but they become immortal life-long companions in the blink of an eye. Evie resisted at first, but it wasn’t much of a fight. They quickly became each others’ everything. Love at first sight has its merits but in this case it wasn’t fitting. I found it hard to believe that someone in Evie’s position would just embrace her new existence so readily. She’s been through hell and then some only to do a 180 and for everything to magically become hunky dory.

The main part of this book revolves around Evie and James’ love story. They bask in each others company and try to learn every minute detail about the other. One night, during a romantic stroll through Central Park, they encounter another vampire which kick starts their adventure. However, it wasn’t immediately evident what the danger was. In fact, it seemed like the bad guys were thrown in as an afterthought. None of the confrontations seemed connected until near the end when the plot finally comes to light. My impression of this novel went something like this: happy lovey dovey couple, couple kicks random vamp’s ass, repeat. There weren’t any obvious connections between the main characters and the main plot. Everything snowballs from here, all of a sudden James has an evil uncle who’s trying to put an end to a centuries old treaty. Heuh?

Stealing Time is primarily a romance novel with vampires. I’m not sure if that was the author’s intent or if the supernatural war was supposed to take center stage. This novel seemed like it was meant to be a mix of the two but failed to achieve that balance. The ending left me with more questions than answers and wondering what the main goal of the book was. The novel itself isn’t bad, it just wasn’t what I was expecting. Review: A Demon and Her Scot by Eve Lang Review: Building From Ashes by Elizabeth Audiobook Review: No Rest for the Wicked