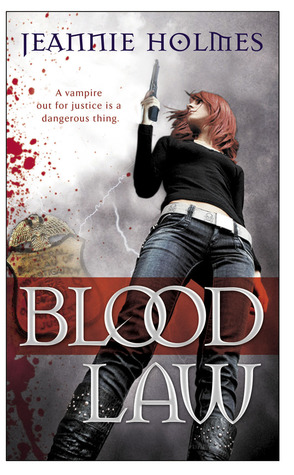 To stop a vampire killer, she’ll have to slay her own demons first.

A provocative and savvy vampire, Alexandra Sabian moves to the sleepy hamlet of Jefferson, Mississippi—population 6,000, half vampires—to escape the demons lurking in her past. As an enforcer for the Federal Bureau of Preternatural Investigations (FBPI), Alex must maintain the uneasy peace between her kind and humans, including Jefferson’s bigoted sheriff, who’d be happy to see all vampires banished from town. Then really dead vamps start turning up—beheaded, crucified, and defanged, the same gruesome manner in which Alex’s father was murdered decades ago. For Alex, the professional has become way too personal.

Things get even more complicated when the FBPI sends in some unnervingly sexy backup: Alex’s onetime mentor, lover, and fiancé, Varik Baudelaire. Still stinging from the betrayal that ended their short-lived engagement, Alex is determined not to give in to the temptation that soon threatens to short-circuit her investigation. But as the vamp body count grows and the public panic level rises, Varik may be Alex’s only hope to stop a relentless killer who’s got his own score to settle and his own bloody past to put right.

I’ll be the first one to admit that I bought this book based on the cover alone! I did read the synopsis as well and the mention of vampires further sealed the deal. Fortunately this book’s contents mirror its cover in that they’re wicked! The direction that the story takes surprised me a little. The plot didn’t unravel as I had expected. Good, because I hate predictable books!

The start of this novel is slower paced than I would have liked. The story really started moving once I was past the half-way mark. So stick with it! Alex, the main protagonist, is a vampire. Don’t let that fool you though, she’s a do-it-by-the-books kinda girl. That is until everything goes to hell causing her poker face to crack until it ultimately disintegrates. Alex is an interesting character to get to know. She’s very complex but in a way that’s decipherable. Watching her sway back and forth between doing her job and doing what’s right was moving. Her struggles were palpable and I think that in the end she did what most would have done in her situation. Family comes first.

Vampires and humans live together somewhat harmoniously in this book. Like everything else, there’s always people on both sides of an argument and this one is no different. The main bad guy is scary crazy and it took me quite a while before I caught on to his identity. He’s not alone though, he’s also a member of an anti-vamp group that stirs up more than their fair share of trouble. They reminded me of the Fellowship of the Sun in True Blood. This combination made for one killer line-up of antagonists. The changing POVs of the narrators left me feeling like I had been inside the main bad guy’s head. Cool yet disturbing…

There were A LOT of acronyms in Blood Law. Too many in my opinion. Between the branches of law enforcement, anti-vamp groups and other various names I was overwhelmed. It was hard to keep track of them all and when the complete names were omitted in subsequent chapters I was stuck flipping back in search of clarification. A terminology glossary would have been a welcomed addition at times.

Varik is the man-candy of this book. He’s not going to visit my dreams at night but he’s alright as far as fictional men go. Alex and him have an interesting yet messed up past that makes for a very tense present. Readers get to watch these two characters go through a whole range of emotions in this story. This brought a deeper level to this novel. Not only is the story good but there’s lessons to be learned and morals to be shared. There aren’t many urban fantasy books out there that can make the same claim!

I found it hard to believe that Blood Law is Jeannie Holmes’ debut novel. It may have started off slow with a few hiccups along the way but overall it’s a fantastic book. The next installment, Blood Secrets is due to be released on June 28th, 2011. I for one will be picking-up a copy as I think that this could be the start of a beautiful series! So there you have it, this book isn’t just a pretty cover!

He created–no, spawned–vampires in the pits of Hell and sent you demons here, to earth, to create chaos and discord among humans.
-page 29 chapter 13