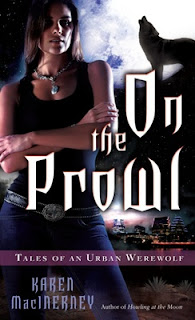 After finishing Howling at the Moon, the first installment of this series, I was eagerly anticipating reading On the Prowl. Karen MacInerney did not disappoint! I was immediately immersed in this second Tale of an Urban Werewolf. This novel took me all of 24 hours to read. My boyfriend’s absence may have had something to do with that but, great writing and an awesome story were definitely strong contributing factors as well.

Sophie Garou is back and is as entertaining as ever. One of the main attractions in this series for me is the contrast between her human life and her animal one. She’s just made partner at a high powered auditor firm and is expecting a proposal from her boyfriend Heath. Of course, that is until her second nature gets in the way. Sophie has been flying under the werewolf radar all of her life but in this book her secret is exposed and she’s faced with werewolves galore. Not her idea of an ideal situation!

Miss Garou’s constant battle against unruly hair growth was as hilarious as in the first book. I particularly enjoyed a bathroom stall conversation between her and Lourdes, a new werewolf. They’re comparing hair removal horror stories with different techniques likes Nair, waxing, shaving, etc. The challenges of being a modern day female werewolf! This talk reminded me of the banter I hear in public washrooms but with a supernatural twist. I like the way MacInerney gives the characters dilemmas that are similar to every day life. It makes them all the more relatable. When Sophie pulled out her back-up razor for her friend I couldn’t help but giggle.

I wish I had Sophie’s problems with men! She may me a magnet for trouble but she’s also one for swoon worthy men. A third handsome male is added to her plate in the form of Mark, her biggest new client. He’s rich, gorgeous, chivalrous but there’s more to him than meets the eye. Way more! The book doesn’t entirely explain what’s up with him; I’m hoping the final installment will. Mark sort of overshadows the two other men. Heath, her boyfriend fades into the background but Tom is as delicious as ever. Between Mark and Tom I’m having a hard time choosing a favorite!

Garou finally meets the local pack leaders and is sent on a reconnaissance mission for them. This fashionista isn’t quite cut out for stealthy spying! Naturally, she blows her cover and find herself running from her enemies and her main concern seems to be her shoes. In her situation, shoes would not have been high on my priority list while running for my life. Then again, I wouldn’t have went on such a mission wearing $500 high heeled shoes. But that’s just me!

The ending of this book is a whirlwind of action. Secrets are revealed, questions are answered but like any good book in a series there are a few mysteries left unsolved. After finishing this book, there was never any doubt in my mind that I was going to read Leader of the Pack but it’s always nice to get a little more incentive. I’m sad to say that there’s only three books in this series. Right now I’m wishing that there were more but before I start whining I’ll wait and see what the conclusion holds.

My review: Howling at the Moon
Karen MacInerney’s Website
Buy from Amazon:

8 responses to “Review: On the Prowl by Karen MacInerney”